COVID 19 AND ITS OVERALL IMPACT 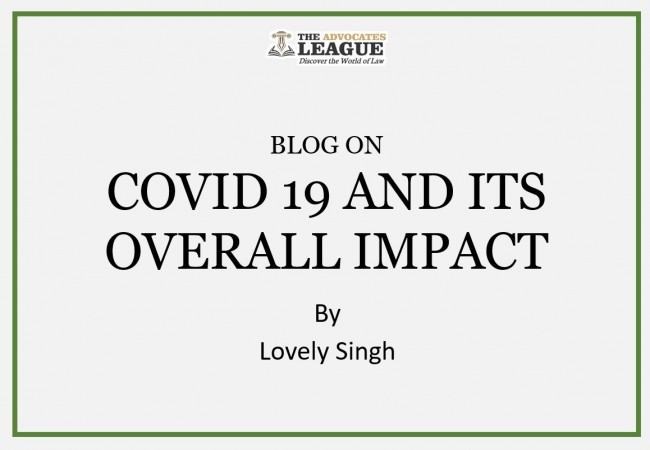 In the present times, the times of spring i.e. the season of love and refreshment has been  juxtaposed to the rather unpleasant and quite insalubrious psychosocial health for human  lives on earth. It would not be incorrect to say that it is an acute outcome of the  uncontrollable behaviour of human beings to achieve the narcissistic goals of their lives, but  nevertheless the outcome has much to do with our future than with our present crisis. The  focus of this article would rather be on how Covid-19 has affected globally and slowly taken  a toll on us while completely incapacitating us to control our endeavour in the real time, so  let alone in nearest quarter of the year thus compelling us to re-think about our already  existing plans and thus plays with our mental health. The unstable mental ability owes its  existence to the dejected environment surrounded by the cries of the poor, the worries of the  health staff and the concerned government to contain this epidemic as soon as possible.

The problem lies not only with the prevalent existential crisis rather with the following  difficulties in survival of human beings and the glim chances of restoration of normalcy in  the near future. The problem is not sector-specific or country-specific, it is rather hitting  all of us hard and in this hour of plight and sense of togetherness binds us all and acts as a tonic for our everyday survival. The problem has no limit when we talk about the life of  the poor daily-wage labourers or the informal sector workers whose every day hard works  brings food and shelter for their families. In India, with a share of over 90% people  working in Informal sector, Covid-19 has the potential to throw approx. 40 crores people in India deeper into poverty due to containment measures taken by the government1. It is not  only India which is otherwise a developing country, but it is even worse with the countries  like USA, Italy, China, Spain, etc. which has witnessed horrendous growth in loss of  human lives and stressed economy. The effect on economy is global and the weaker ones  are the worse sufferer, however that is only a balance of preponderance of probability.

This pandemic has also highlighted the efficiency and capability of the government in  minimizing the adversities and to avoid it to the largest extent possible.

This pandemic is affecting tertiary sector where poor farmers who have made heavy investment  in their crops to reap and earn their livelihood is miserably hampered due to stoppage of the  fertilizers and other pesticides from across the country leading to debilitating impact on their  family and livelihood. There are various other sectors which are also affected such as  automotive sector which has reported zero sales since the measures of Locking down the  country has taken place as a precaution to combat Covid-19. The market for Crude Oil has also  been affected severely since the major oil producing countries like Russia, Iraq, US, China, etc.  has been pandemic stricken and also the reason that lockdown’s have kept the people inside  leading to heavy crash in oil-pricing leading to hugely affecting the economy.

The current situation can see no cure and no superpower has the mechanism to combat this  devastative disease which has already taken more than 2 lacs lives and more than 3.58 million  affected world wide.2 The researchers in consonance with the Indian Council of Medical  Research (ICMR) and few other Institutes have come up with numerous medicines such as  Hydroxychloroquine and prospective treatment to the instant disease and have tried to extend  their helping hands to few other nations globally. Further, the Central as well as State  government have launched various schemes and applications to keep a track on Covid-19  spreads within the community, to combat this since March, 2020 as a containment measure in  India.

Lastly, we can safely conclude that the Government has to come up with certain employment  opportunities in different avenues and set up Industries as soon as possible to accommodate all  the jobless workers hit by this pandemic. Further, the government has to build opportunities  for the 2020 pass-out batches enrolled under different courses and to get them some  opportunities since these people are the worst affected. The pressure created on the Central as  well as State Government, Scientists, Research Institutes, Health workers, Sanitation workers,  house guards, Police people and everyone who has a vital role to play are under immense pressure thereby affecting their mental health and well-being. The government has to be better  equipped for any such crisis arising in future, and increase the fund under the head of Disaster  Management.

Therefore, the pandemic that has arisen and the plight that the entire human race is facing is  partially our own deeds and the greed to capitalize more has triggered the process. The  government has to work on employment generation both for the youth and the poor workers.  It should further target to achieve large profits to maintain its deficit and focus on the overall  economic growth. Therefore, we stand strong and united with our fellow men in this time of  crisis and hope that all of this comes to an end soon. However, due to current unprecedented  situation, we’re reminded of innumerable things due to no human intervention and no anti nature activities, other lives in the human system has started living freely and contributing to  the ecosystem. Further, the moving of the vehicles on the roads has dropped down heavily, the  industries emitting hazardous chemical discharges in the river and the air has lessen down  leading to fall in environmental pollution and gearing up our chances of great health on this  planet. It would not be wise to say, that the present situation has divine outcomes, however it  has long lasting effect both in the negative as well a positive manner. Now, time can be the  best judge to uncover all its chapters yet to be seen.

2 https://ourworldindata.org/grapher/total-deaths-covid-19. Last visited on 4th May, 2020.