EMPOWERING CONSUMER PROTECTION RIGHTS IN INDIA: JUMP FROM 1986 TO 2019 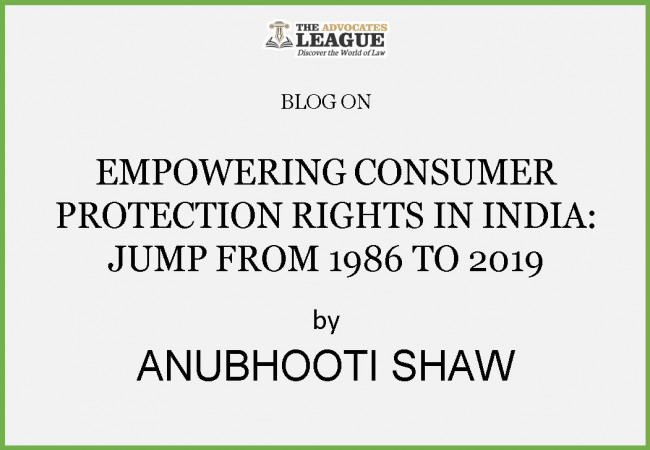 "Instead of gutting consumer protection, we should be expanding it."

With the acknowledgment of several consumer rights established in the Consumer Protection Act, 1986 (“old Act”), India has long given preference to Caveat Venditor (Seller Beware) over the ancient principle of Caveat Emptor (Buyer Beware). The environment of consumer rights and transactions has shifted dramatically in recent years, necessitating the adoption of novel legal provisions to acknowledge the rights and remedies accessible to consumers.

A new era of commerce and digital branding, as well as a new set of customer expectations, has arrived with the Digital Age. Easy access, a wide range of options, efficient payment mechanisms, improved services, and buying at one's leisure have all been made possible by digitization. However, as the company grew, it faced issues connected to consumer protection.

With this in mind, and in order to address the new set of challenges that consumers face in the digital age, the Indian Parliament passed the landmark Consumer Protection Bill, 2019 on August 6, 2019, which aims to provide for the timely and effective administration and resolution of consumer disputes. The President of India gave his assent to the Consumer Protection Act, 2019 (New Act), which was published in the official gazette on August 9, 2019. The New Act will take effect on the date that the Central Government specifies. The New Act aims to replace the Consumer Protection Act of 1986, which is more than three decades old (Act).

Limitations to the Consumer Protection Act, 1986

Despite having specific measures to protect consumers from unfair trade practices and other types of violations of consumer rights, the Act failed to regulate certain wrongs perpetrated against them. The problem of product responsibility was one among them. Allegations of excessive lead concentration in Maggie noodles, as well as flaws in Volkswagen cars, are just a few examples of events that have generated concerns about the ineffectiveness of legislation in avoiding such incidents. Because defects in products such as food can cause ‘harm' to customers, it was considered that a strict and deterrent legal process should be in place to hold manufacturers, distributors, and others responsible.

Another legal issue that needed to be addressed was celebrities supporting goods through commercials, influencing and, in some cases, misleading consumers in their purchasing decisions. Both celebrities and advertisers must be aware of the influence and power of advertising in order to make responsible claims to sell products or services.'[1]

False and misleading advertisements infringe on a number of consumer rights, including the right to information, the freedom to choose, the right to be protected against harmful goods and services, and the right to be free from unfair trade practices.[2] In March 2019, the ASCI's Consumer Complaints Council in Mumbai had assessed 344 advertising and upheld complaints against 229 deceptive commercials.[3]

The Keynotes to the Consumer Protection Act, 2019

▪                  Establishment of the Central Consumer Protection Authority (CCPA): The New Act proposes the creation of a regulatory agency known as the Central Consumer Protection Authority (CCPA) with broad enforcement powers. The CCPA will have an investigation wing, led by a Director-General, that will be able to conduct inquiries and investigations into infractions of consumer laws. If a consumer complaint affects more than one (one) individual, the CCPA has been given broad authority to take suo moto steps, recall items, force repayment of the price of goods/services, cancel licenses, and initiate class action litigation.

▪                  Product Liability and Penal Consequences: The New Act introduces the notion of product liability and makes the product producer, product service provider, and product seller liable for any compensation claim. The word "product seller" is defined as "any person involved in placing a product for a commercial purpose," which would include e-commerce platforms. The defense that e-commerce platforms are only "platforms" or "aggregators" will be rejected. Manufacturers have greater legal risks than product service providers and dealers because, under the New Act, manufacturers will be responsible for product liability actions even if they can show that they were not negligent or dishonest in making an express claim. Under the New Act, there are some exceptions to liability claims, such as the product seller not being liable if the product has been mistreated, altered, or modified.[6]

▪                  Penalties for False or Misleading Advertising: The CCPA can fine a manufacturer or endorser up to INR 1,000,000 (Indian Rupees One Million) for making a false or misleading advertisement. For the same, the CCPA may sentence them to up to 2 (two) years in prison. A third offense might result in a fine of up to INR 5,000,000 (Indian Rupees Five Million) and a sentence of up to 5 (five) years in jail. The CCPA also has the power to bar an endorsement of a deceptive advertisement from endorsing that product or service for a period of up to one year. The duration of restriction may be extended to 3 (three) years for each successive offense.[7]

▪                  E-filing of Complaints: The New Act gives consumers the option of filing complaints with the jurisdictional consumer forum closest to their home or place of business. Unlike the present practice of submitting it at the point of purchase or where the seller's registered office is located, this is a new practice. The New Act also includes provisions that allow consumers to register complaints electronically and conduct hearings and/or examinations through videoconference. This is done to make the process easier for consumers and to eliminate inconvenience and harassment.[8]

As can be seen, CPA 2019 differs from CPA 1986 in a number of ways. The Consumer Protection Act of 2019 (CPA 2019) has broadened the scope of India's consumer protection regime. The modifications introduced by CPA 2019 appear to further empower consumers by putting more responsibility on their counterparts, such as sellers, manufacturers, and service providers, as well as product endorsers. It also tries to address concerns that were not fully addressed by CPA 1986, such as consumer interests as a class, and so forth.

By raising the pecuniary jurisdiction of the commissions, attaching mediation cells, increasing the number of members of the commissions, imposing greater penalties, and so on, CPA 2019 aims to make the process of resolving consumer disputes easier and faster. Because several new concepts have been proposed, the effects of CPA 2019 cannot be predicted in advance. What can be said with certainty, however, is that everyone participating in a transaction, aside from the consumer, will have to be more attentive and cautious than ever before.