Role of BCI in Legal Education 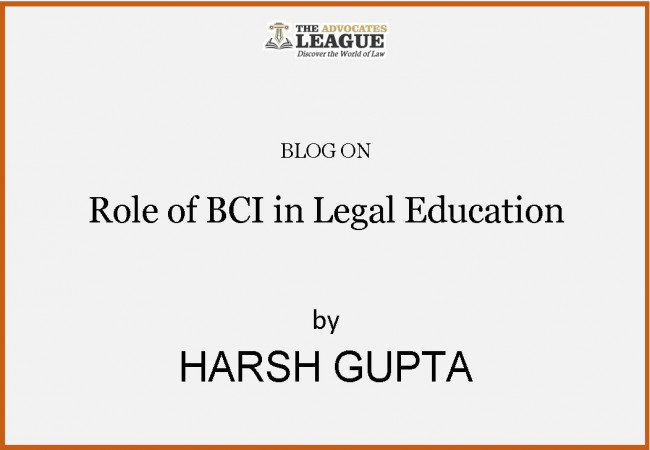 The main purpose of constituting the statutory body by parliament was to set, define and allocate standards to the bar regarding professional conduct, etiquettes and disciplinary jurisdiction and it also set standards for legal education regarding important course circular, syllabus of the course, eligibility criteria for applying in higher studies in the field of law, the conduct of examination, marking criteria, etc.[1]. as we all are aware of the famous saying that – ‘law is very dynamic, it changes with time’ which means there may be a law which is not appropriate today and it is in bad shape but tomorrow it may change subject to change in the social order, people’s thinking and mindset and society, so the whole process of change in the position of law in terms of validity can be termed as ‘legal reform’. Now as a prudent man a question can come to the reader’s mind that why the author is referring to legal reforms- it is because when law colleges will follow the standards set by BCI regarding imparting theoretical and practical knowledge by way of conducting proper academic classes, moot courts, mock trial courts, extracurricular activities, law assignments, seminars, webinars, debate completion for holistic development of a law student, then they are bringing reforms within the institution and when a student gets all exposure he/she needs to become an efficient lawyer and advocate,  the objectives of BCI in the field of legal educations get fulfilled.

There are various committees within the BCI, one such committee is the legal education committee[2] which consists of five members from the union law ministry, and judiciary, university grant commission, academia and five members of the bar council of India. The committee functions to make recommendations to the bar council of India regarding setting up of standards of legal education in universities, to visit the colleges to ensure due compliance of the standards laid down by BCI and after inspection, it has been found that law faculty’s infrastructure, library access, faculty credentials are not up to the mark regarding qualifications, the BCI has the power to discredit the license issued to the law college or university after proper investigation. Recently Delhi high court ordered BCI to inspect the irregularities at faculty of law, JAMIA HAMDARD UNIVERSITY, NEW DELHI after a person filed a petition for the same where allegations were made regarding the qualification of the dean and other faculties.[3]

There are some grey areas that need to be solved, this is what reality check is all about, those who are associated with the law profession are very well aware of debate regarding NLU and non-NLU colleges, people mainly the law firm associates reject law students if they are not from NLU, doesn’t matter how hard a person worked, how many internships he did, so here tag of an NLU student dominates overall hard work and talent if another person doesn’t come from NLU, so BCI should look into a universal way of imparting legal education without any prejudice to anybody, private colleges should be held more accountable as NLUs are few in our country, so major chunk is the private sector where BCI should focus more.

Another grey area is a method of teaching to impart legal education among students, the law is more practical than theoretical, but colleges are busy and thus restricted themselves to completion of the syllabus in any manner possible, BCI is somehow inefficient to tackle the issues of practical learning as they believe in university authorities and we all know how good manipulators they are! So, BCI should employ a member for every law college all over India who will report to the council every month and university should pay his/her fees and post should be based on a rotation policy of six months, it will lead to the smooth functioning of law school in terms of both theoretical and practical learning.

Nobody can deny that the establishment of national law universities has paved the way for India to become a world leader when it comes to solving the disputes of clients at the national and international level, these institutes have represented India at the worlds rankings but at the same time we cannot deny the pathetic condition of Indian private unaided law institutions when it comes to imparting legal education, the current phase is of globalization which means transnational issues which a lawyer has to deal with, so the law cannot be seen in isolation[4] and with the advent of new cyber laws, air and space laws, drone laws, it's the laws, opportunities are bound to come, for this we have to be trained in that particular manner, lawyers will need to tackle multi issues at one given point of time, it's only possible if BCI takes important steps to tackle those nuances.