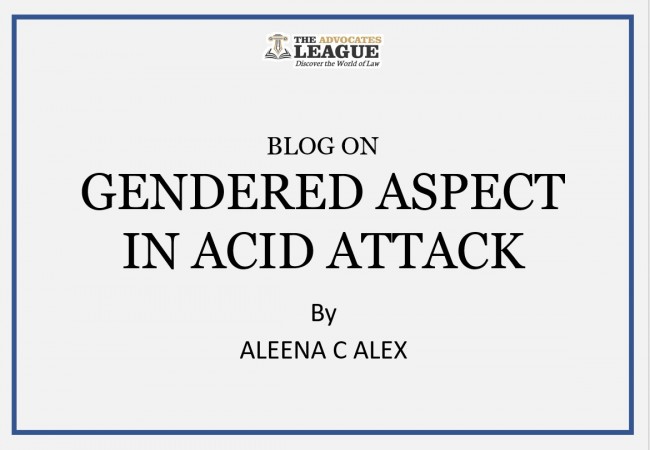 “Acid attack woman are not victims, they are survivors. They change their faces not their dreams, they destroy their profile not their imperishable soul”

ABSTRACT: India is a country which reports approximately 200-300 acid attacks every year. The worst part is most of the victims are women and children, as a result of rejection of marriage proposals. Increasing acid attack towards women brought a gendered aspect in this heinous crime. So the female has to be considered as the most vulnerable section towards this inhuman activity. What are the reasons which increased acid attack towards women? How can we control such crimes?

Acid throwing also known as acid attack, or vitriolage.  It’s a form of assault which is defined as the act of throwing acid onto another with an intention to disfigure the body. Overwhelmingly in India, the victims of acid attack are women and children. Hundreds of young women are becoming victims of this attack every year. There are many reasons behind this dreadful crimes which extends from rejection of marriage proposals to dowry issues. The number of acid attack shows that the attack has now gained a women centered or a gendered aspect. The accumulation of victims or sufferers are due to the ineffective laws or the lack of implementation of proper laws which makes the people think of the after effects if they commits such crimes.

Acid attack nowadays has become a heinous crime especially against women. The criminals doesn’t aim in killing the victims but to left them in a state of physical and mental illness which follow them in their entire life. This are the results of rejection of marriage proposals and other sexual desires. [1]The male prefer to hurt female in 9 out of 10 times with acid because they love their beauty. They wanted to ruin the romantic future life of women which was rejected to him. He also wants to destroy her social status, career, economic background which made her more strengthen and rejected his proposals. In India, one third of women in age group 15-49 undergo physical violence,[2] but 2 out of 3 women will not share their experience with anyone.

There are 250-300 acid attacks cases reported in India every year, among them most of the victims are women. Other crimes against women like rape increased in the capital city from 572 -2,155 within 5years as per Delhi police report. 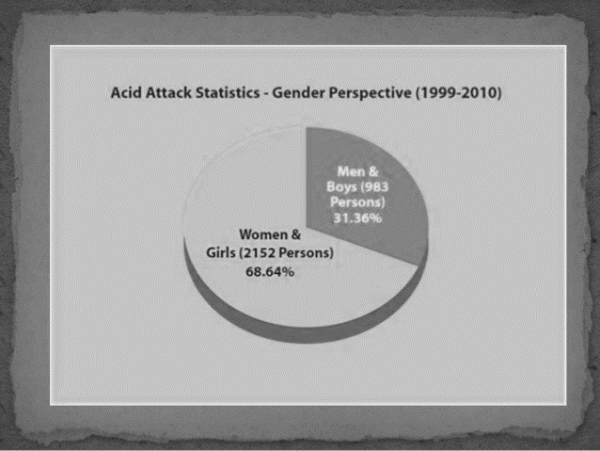 The diagram clearly show how the females are affected more due to the inhuman acts of acid attack. There is a huge difference existing between the number of male and females who are attacked.

The depth of injury and the after effects depends upon the intensity of the acid used and the time for which the victim had in contact with the acid. The acid can cause complete destruction or damage to eye, ear, nose and the inhaling of acid can also cause severe damage to lungs which results in breathing problems and suffocation.

Above half (63%) had similar burns and the reason for the attacks are refusal of marriage proposal, dowry, doubt on character, drug addiction, marital affair.

[3]Majority of the victims (73%) had to face psychological effects including ignorance of children, behavior of family and relatives which are more painful than the physical injuries. Most of them are self-isolated and are suffering from loneliness. The victims also becomes unable to work and depends upon some others for their food and shelter. Consequences also includes the negative attitude of the public towards them.

RISE OF ACID ATTACK IN INDIA

[4]According to National Crime Records Bureau it’s found that the number of victims of acid attack have reached 1,483 between 2014- 2018.

Supreme Court in the year of 2013 ordered government to limit sales of acid, but it’s scary to know that these acids are still available in country to anyone even at a very low cost. This shows the failure of the government to implement the laws which are passed. The failure in implementing rules and prosecuting the criminals is the root cause for the increase of acid attack every year.

[7]As per NFHS final report only 2% of abused women seeks help from police, which is a major reason for the increase in the number of crimes. This 2% who strive for justice in certain situations has to be satisfied with the inefficiency and apathy of the legal system, those who brought to book in rare cases are let go in name of bail. The increasing acid attacks can be now concluded as the after effect of the legal system.[8] India has to refer to certain laws of countries like Bangladesh which came up with death penalty for the acid attack in, 2002. Pakistan provides the perpetrator the same faith as of the victim and in Iran the attacker has to be blinded. The strict rules followed by this countries made it possible to reduce the number of acid attack as compared to India.

LAW AGAINST ACID ATTACK IN INDIA

India is a country which has a huge increase in the number of acid attacks every year even then ,until recent time there was no specific provision in India which deals with this crime. 226th Law Commission and Justice J.S Verma committee made suggestions on this behalf which paved way for the introduction of specific provisions.

[9]Section 326A (provides 10yr of imprisonment which may also extend to life imprisonment for causing grievous hurt in acid attack) and 326B were added in Indian Penal Code which provide punishment for acid attack and attempt for the same. Additional clause also added in Section 100 which provides exception from criminal liability for causing death in case of private defence in acid attack. [10]Indian Constitution also provides protection against such crimes which is included under fundamental rights.There is Prevention of Offence (by Acid) Act, 2008 which also provides the protection against acid attack.

Acid attack is one of the most dangerous crime which is now existing in our country. It's also to be noted that the victims to this kinds of crimes are women due to different reasons. This increase in the number of acid attack towards women brought a gendered aspect for this kind of crimes. The only way to fight against or to protect our mother and sister from this heinous crime is to implement new laws and strengthen those laws which are already in existence. When compared to other countries like Pakistan, Bangladesh the number of acid attacks are very less. This is due to the strict rules which are existing in those countries. The punishment like death penalty, blinding, and same effect as of victims etc. helped a lot in reducing  the crime in these countries. So the only way reduce the attack in our country is to adopt similar kinds of punishments, which makes the people scared and prevent them from doing similar kind of crimes while thinking of this kind of punishments. The other way to reduce the crime is to completely prohibit the availability of acid to people in the country. So making strike rules on this behalf and implementing the same more effectively can help to reduce the attacks in our society.