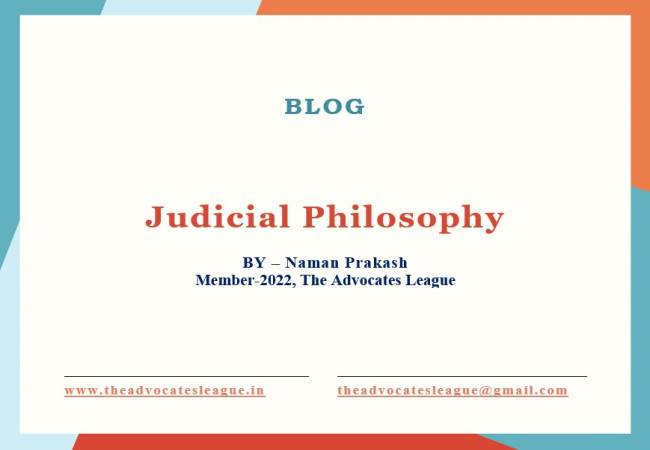 Judicial philosophy is the lens through which judges perceive and apply the law. Even while laws are generally applicable, they must be used in specific instances where there are special circumstances. Judges interpret the law in order to accomplish this, figuring out its aim and occasionally its meaning.

Some judges adopt an activist stance, utilising the courtroom to bring about social and political change. Some judges follow a restraint-based philosophy, holding that rather than trying to pass new legislation, judges should interpret the existing rigidly. Furthermore, every judge develops their own ways of reading the Constitution based on their own personal ideologies. There are several political and judicial ideologies that tend to align. Generally speaking, but not universally, stringent constructionists support judicial restraint. The idea of original intent is likewise adhered to by many supporters of judicial restraint. But there are times when these perspectives don't coincide. As a result, judicial philosophies differ from political ideologies in this regard.

A philosophy of interpretation used by the judiciary is judicial restraint. It is an idea that suggests judges should restrain the use of their authority by abstaining from influencing the outcome or the course of the proceedings with their personal preferences and viewpoints in favour of adhering to statutory and constitutional requirements. It asserts that judges should hold off on overturning legislation unless they are clearly unlawful. The legal professionals who favour judicial restraint contend that since judges lack the authority to make policy, they must rely on legislative purpose, stare decisis, and a rigid application of judicial interpretation.

According to this procedural rule, judges must provide significant deference in cases involving constitutional questions and only overturn their decisions where there has been a clear violation of fundamental constitutional principles. In order to encourage the adoption of fresh ideas and policies, the courts should restrict the concept of judicial review. The judiciary must therefore concentrate on the following factors:

●       The purpose of the Constitution's framers

In the State of Rajasthan v. Union of India case from 1977, which set a precedent for judicial restraint, the court opted not to investigate the case because it entailed political investigation. In S.R. Bommai v. Union of India, the Supreme Court further ruled that because the case involved a political investigation, the courts should not become involved. According to Justice Ahmadi, it is difficult to develop judicially sound norms to scrutinise political choices, and if courts did so, they would be entering the political fray and analysing political expertise, which they must avoid doing.

Contrary to judicial restraint, which holds that judges should interpret the law in light of how society is changing, judicial activism holds that judges should act in accordance with the law. The Black's Law Dictionary defines judicial activism as a judicial philosophy that encourages judges to deviate from established precedents in favour of progressive and novel social policies. With the authority granted by the Constitution, the judiciary rules to address such public complaints when the executive branch does not make judgments that are in the best interests of the general public. As a result, the idea of judicial activism emerged, emphasising social welfare. Sometimes judges will interpret the law in a way that is more in line with current views than those that were developed during the Constitution's construction. Decisions are made by judicial activists by using their own free will in the cases and addressing legal difficulties while keeping in mind the social requirements of the time.

Supporters of this idea contend that as values and circumstances change along with society, the law should be applied in conformity with current values and circumstances. Therefore, the judgments must also account for these modifications. When the other branches of the government fail to act as expected, the courts should use their authority to right the wrong.

The Supreme Court recited "the procedure established by law" into Article 21 of the Constitution, repositioning it as "due process of law," or the procedure that ensures justice, equity, and good conscience, in the landmark decision of Maneka Gandhi v. Union of India. This is a great example of judicial activism. Another instance of judicial activism by the court may be seen in the Second Judges Case, also known as Advocate on Record v. Union of India, and the definitions of "concurrence" and "consultation" under Article 124 of the Constitution.

A judge who adheres to a rigid, literal, or conservative interpretation of the constitution and who frequently emphasises the need for state governments to maintain as much control as feasible (tends to be conservative)

A judge who likes to emphasise the vast powers granted to the federal government and who has a loose, liberal interpretation of the constitution (tends to be liberal)

Our Constitution is the subject of two opposing schools of thought. and "Original Intent," respectively. In order to trick people into thinking that our Constitution applies to their lives, the term "Living Document" was created. The opposite is true in every way.

In fact, they contend that the U.S. Constitution should be scrapped since it has become dated over time. They contend that their political thought is superior to the nation's founders'. In their deception, they have had considerable success. In their deception, they have had considerable success. Many people have been duped by them. When I ask someone if they believe in the "Original Intent" or "Living Document" theories of the Constitution, many reply that they believe in the "Living Document" theory because they don't know what the word "Original Intent" means or what it is supposed to achieve.

CHECKS ON THE COURTS

The power of the judiciary branch is regulated in a number of ways by the legislative and executive branches. Judicial Implementation, the procedure used to carry out a court's decision, is the primary means of limiting the courts' authority. The executive branch must carry out court orders, but if the president or governor disapproves of the decision, he or she may choose to disregard it or just partially carry it out. By using their financial authority, legislatures can also restrict the courts. A Supreme Court ruling will not be enforced if Congress declines to authorise funds for its implementation. The Constitution may also be amended by Congress and state legislatures, who can do so in response to a court decision.