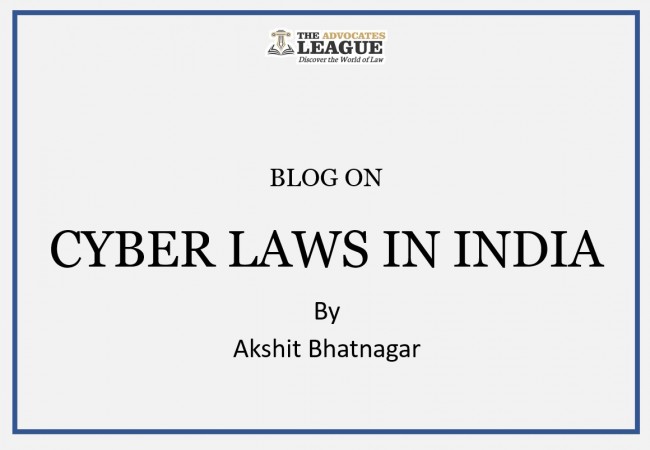 OBJECTIVES: This chapter gives a brief review about the cyber laws that prevails in india a decade ago and the changes and amendments made to them with respect to improvise the vision of the cyber acts and its legislations. This chapter defines the definitions and procedure related to crime committed by the use of technology mainly computers and also talks about the legislation of India dealing with such crimes or offences related to the abuse of computers, misuse of information which could be private or publicly important etc. The INFORMATION TECHNOLOGY ACT 2000 AND IT AMENDMENT ACT 2008 deals with its provisions of offences and the punishment for offences.

The offence which is intentionally performed to hurt someone or which is done beyond the limits set by the government or is illegal in the eye of law can be termed as crime. Crime itself is an ancient practice which can be found in kautilya’s Arthashastra. Also it mentioned the punishment to be borne by the criminal according to their deeds. Crime has many categories like economical, financial, physical, social, cyber etc. crime whether it is of any type always adversely affects the society in many ways. But if we  talk about cyber crime, then it can be very dangerous and also it sometimes results in deaths and big accidents. For e.g. [1]dark web, which is  not fully illegal in some countries but most of the sites and stuff and illegal and is used for illegal purposes are available with utmost supply and demand. Not only these stuff but also you will find many files which could be disturbing and can harm your mental condition.

Cyber crime is increasing mostly in developing countries. In most countries where technology is increasing at its pace, the crimes related to technology also grab the grips and mainly targets the field of economic activities . Applause to the penetrated mechanism which walks from the pocket to big corporate governance and state legislation. In today's era without technology people feel empty and they are heavily dependent on technology. They even have an air purifier in their home as most of them are so fond and depend upon technology. The mechanism is so strong that man can’t even go through a single moment without a computer and cell phone.

Cyber crimes are not introduced in any act neither in IT act nor in IT  Amendment act. There’s not even have a definiton on cyber crime in any procedure or rules in india. The offences that has been committed under this act shall be with the provision of [2]Indian Penal Code 1860,   the Indian Evidence Act, 1872, the Bankers' Books Evidence Act, 1891 and the Reserve Bank of India Act, 1934. These are the foremost legislations that hands out the offences under cyber offences. Cyber  offences or crime is basically offence which is committed by computer Or some technological input. Interestingly, picking pocket or steal money can be considered a crime if it is done by using a computer which has the information of people used by fraudsters.

THE PROPAGATION OF IT LAW IN INDIA:

About three decades ago, the law scholars and government saw a momentum in globalization and computerisation. Most of the nations were adopting these policies in their private sector as well as in their governmental legislation. As a result it emerged as a big profit and made the work easy for governments by e-commerce and computerising their data than investing in paper work.

As the increasing international trade and email tradition was achieving propulsion, an immediate and impending need was felt for the admit the electronic records or information and  to approve the records and documents that is to be kept in computers and also their verification and legality in the global economy.

The United Nations Commission on International Trade Law (UNCITRAL) acquire an e-commerce model in the year 1996. the  main aim of the model was to get the legal recognition from all the state members of united states, so that the electronic records should be recognise as the same way the paper records and communications are.

⇒ legal recognition to digital signature for the verification of documents

⇒ To recognise the offences and contravention of cyber crime

Further this act was amended in a new way and the new act which brought changes to the existing act was IT Amendment Act 2008(ITAA).

This was the first act which has brought new legislation to the cyber world. The act was very much debatable as many scholars and law makers thought that some parts of it are draconian and some parts are too lenient and diluted. There was some conspicuous omission too which investigators and officers have to rely on Indian Penal code which is one and half century old.

There were many problems which were faced by the officers in investigating crimes as cyber crimes was not recognised under any act neither it has any provision in constitution. So to decide the punishment and to categorize these crimes several changes were made in IPC so that the crimes get verified and the punishment should be decided as per the IPC. There was a major need in the IT act to be amended and several major industries and corporates were consulted, contrast  it with similar legislation of foreign nations and to recommend some suggestion for the development of this act. The suggestions were then scrutnize and then applied as effective act.

[4]The main objective of ITAA are:

⇒Addition of offences like child pornography and cyber terrorism

These are some objectives of ITAA 2008 which have been amended to the previous act to make it efficient and  remarkable.

Section 65 to 75 are the most important sections of ITAA as these define the punishment for the offences that are most commonly committed by fraudsters. Here are some examples of some sections that define:

This includes destroying or concealing of data knowingly or intentionally to cause harm or to steal private entities with the use of computer source code, computer network, computer programme or any system operated by computer, the offence shall be dealt with the punishment imprisonment up to three years,or fine which may extend up to two lakh rupees or both. Tampering of evidence and performing falsification of evidences was produced in the case of  [6](Bhim Sen Garg vs State of Rajasthan and others, 2006, Cri LJ, 3463, Raj 2411) and got punishment under this section.

Data theft related offenses are defined and included in this section. The offenses execute under the section 43 are the same but the word dishonestly and fraudulently are specially included in this section. As these words describe the criminal intention to commit the offense. The offence data theft or the act stated under section 43 if done fraudulently or dishonestly shall be a punishable offence under section 66 and adds three years of imprisionment or fine upto rupees 5 lakh. Earlier the word hacking was introduced under section 66 and was considered as offence. But  the amendment in the act made changes in article 43 and relating article 66 with it make it more enthusiastic and the word was then removed. It was debatable as ethical hacking is a part of education which is adopted and practiced in most of the colleges. Just because the word ethical is used doesn't mean that it became legal or gave the right to practice. This can be used in a good or bad way. So it will be used when their is certain necessity or the government thinks that it can solve any problem or case related to computer offence then only it can be practice for the worthy work.

The section deals with the offence of publishing or transmitting any obscene material in electronic form, which is lascivious or appeals to the prurient interest shall be imprisoned for the term of three years which may extend upto five years and fine of rupees five lakh and can be extended upto ten lakh rupees or both.

All the offences related to obscene transferring or sharing of images, videos or any file on electronic form will be dealt under this section. This section has authentic importance since the landmark judgement which was considered as the first conviction in the past of indian legislation in this section and was the famous case of [9]“State of Tamil Nadu vs Suhas Katti” on 5 November 2004.

These were some examples of the important section with punishments. For further more details about the section the reader should take a review on IT AMENDMENT ACT 2008.

Conclusion: However the dream of a society free from malfeasance is unworldly and can be seen only in the haluciation, where it should be easy to keep the crime at the lowest rate. But in a real world, the truth is it is increasing day by day and it is taking a new form in the name of cyber crime. The crimes now are bound to increase day by day and lawmakers have to pass some extra distance to develop something which could restrain them from committing certain offences. Technology could be utilize in both advantageous and in adverse ways like stenography, trojan horses, phishing,scavenging, stalking, hacking etc. So it is the duty of the law makers to develop something new and persistence to track the crime and also to put a hold on it by growing the technology in a healthy manner. It can be reduced if the three stakeholders get aware about new techniques and skills i.e. the user itself, the intermediaries like internet service providers or banks and the law makers,regulators and the rulers then it will be easy,secure and safe for the user to comfortably use the internet for storing data without any harm and to perform other tasks without any stalking and trojan. They should play their provided roles efficiently within the limited boundaries and ensure comfirmity with the law of the land.