AN ANALYSIS OF THE UNLAWFUL RELIGIOUS CONVERSION ORDINANCE, 2020 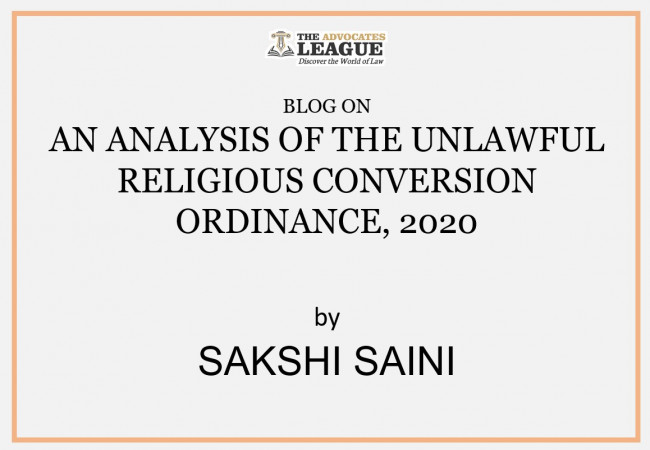 In a layman’s language, the meaning of the word ‘conversion’ is the act of changing from one form to another. ‘Unlawful Conversion’ refers to a conversion that is done without following the due course of law. The term ‘Unlawful Religious Conversion ‘means conversion of religion solely for the sake of obtaining certain benefits. In the present scenario, the unlawful conversion is for the sake of marriage.

The “Uttar Pradesh Prohibition of Unlawful Conversion of Religion Ordinance” was promulgated on 27th November 2020. It criminalizes the conversion of religion for the sake of marriage. This ordinance has gathered support from other states but at the same time, it has triggered several conflicts in the realm of Constitutional Law. The focus of this article is on the legitimate aim of the State to implement this legislation and an individual’s fundamental right to privacy and liberty to marry any individual of their choice as enshrined under Article 21 of the Constitution of India. The blatant violation of the right to freely profess, practice and propagate any religion by this ordinance without any evidence of an unlawful conversion in the state is also a concern of this article.

The decree also undermines the institution of marriage by requiring the states that the parties shall refrain from undergoing conversion by means of marriage. However, in this segment, we will limit our discussion to the issue of the right to privacy. Under Section 8 of the ordinance, an individual is required to submit a declaration to the District Magistrate or the Additional District Magistrate, sixty days prior to the announcement that he/she wishes to convert his/her religion by freedom of his/her choice. This is a serious constitutional issue.

The right to privacy and the freedom of conscience is reflected in Articles 21 and 25 of the Constitution, respectively. With the Allahabad High Court quashing the mandatory publication of notice inviting objections under the Special Marriage Act, the legal situation is tending in the direction of the protection of privacy in contrast to the society’s interest in a private act. However, by mandating a declaration, the state is potentially deploying unreasonable procedures to impinge on inter-faith marriages. Currently, inter-faith marriages have been subject to severe constraints and surveillance, as well as, in the case of a letter of declaration, the police will prevent the solemnization of such marriages.

The ultimate stab to the right to privacy is Section 8 clause (3) which authorizes the District Magistrate to conduct an investigation through the police department to find out the ‘true intent and purpose’ behind the conversion. As held by the Supreme Court in Shafin Jahan v. Asokan K. M., social values and moral values have their place but they are not at the top of the constitutionally guaranteed freedom. The freedom to choose a religion is essential to one’s autonomy and such guaranteed freedom of choice that reinforces the basic principles of the Constitution guarantees the core norms of the Constitution. In our constitutional democracy governed by the rule of law, the police are not allowed to invade the privacy of the people, and, in particular, when trying to find a reason for the exercise of the Constitutionally protected individual autonomy in one's conscience, and religion. By legitimizing their power to infringe upon one’s privacy to adopt the religion of his/her spouse upon one’s volition (protected freedom under Article 21 vis-à-vis Article 25) under the pretext of discerning the cause behind the conversion, the Ordinance paves way for an arbitrary encroachment on the individual’s fundamental right to privacy. Thus, clause (3) is an absolute derogation of the fundamental rights of the individuals.

Therefore, based on the above test, we will argue that, first of all, the decree is unconstitutional, because it would not only be contrary to the fundamental right to privacy, but also to be free from infringement of the fundamental right of the people to the practice, and the practice of the religion of their choice, as defined in article 25. Second of all, there is no formal proof of the legitimacy of the state, and to limit the conversion is by means of a marriage, by calling for it to be illegal unless the individual is free to be told that this type of behaviour does not arise of their own free will set a legitimate State purpose, that is to suppress the freedom of the individual to accept the religion of their choice, and to choose a partner if the decision is taken in this way, it is, of course, completely arbitrary, and, therefore, unconstitutional.

The proportionality between Religious Conversion and Right to Convert by Marriage

Article 3 of this Regulation prohibits any person, or attempt to convert, either in person or otherwise, that the person of one religion to another by virtue of marriage to the other principles. This section provides you muttered, and shall, in the administration of the skirt and the ability to act like a couple to enter into a consensual marriage, and after the voluntary conversion to the religion. This is the main reason that it provides for the administration of sufficient potential to interfere with the fundamental rights and freedoms of the individual, a partner if it is not registered in accordance with the provisions of the Resolution. It follows from this, that the marriage was broken off in Uttar Pradesh within a week of the decision being announced. The interfaith couple, it is free of charge, to be their law, and that to be supported by their parents. However, since the Decree is also required to make a declaration, and the subsequent investigation and the wedding should be postponed until the Special Marriage Act, is to be implemented.

In addition, Article 4 of the act empowers each and every injured person, their family or any other person related by blood, that is, to apply for compensation if they are in contravention of the said Section 3. It takes the view that this chapter does not only exceed the requirements of public morality, the top constitutional morality conflicts with the Supreme Court's dictation, in the case of Navtej Singh Johar v. The constitution. India's Relationships, as well as the Supreme Court's decision in the first comments on Shakti Vahini v. India. India's relations. In Shakti Vahini, the reality is, the Supreme court ruled that when two or more adults of each other, choose tenants of life, it is a manifestation of their choice, which acknowledges that the provisions of articles 19 and 21 of the Constitution. He went on to explain that, with the consent of the family, as a community, clan, is not required when two adults are going to agree to marry her. However, the Decree provides for an exception to this fundamental freedom, which is not in line with the implementation of the law.

As pointed out in the Modern Dental College in the v State of Madhya Pradesh, India, and repeated, in Anuradha Bhasin v, and For the Constitutional right of the limitations the constitution, it is allowed, that is, the proportional relationship between its value and the achievement of the desired goal, and in the public interest to prevent the occurrence of constitutional law limits must be strictly adhered to. As a legitimate State, the task is not to allow the processing of the wedding, as it is the very quintessence of the principle of the unit is determined in the provisions of articles 19 and 21 of the Constitution. Although, this teaching is not consistently applied by Indian courts, both in terms of the determination of the severity of the action that is in breach of a law; it is in relation to the protection of the right in question. The judge, in this case, has taken an approach with great care, and the value of the evidence, including that of the constituent elements of the above tests, is for a legitimate purpose, or in this case, it would not be in compliance with all the necessary evidence that is required is to limit the fundamental right to privacy, the right to personal liberty and the right to marry the person of your choice.

Almost forty years ago, when the Constitutional Panel of the Court of appeals affirmed the Freedom of religion Act in Madhya Pradesh, and Orissa, a wide interpretation of "public interest" in search of legislative authority, and the acts in which it is incorporated do not prohibit "conversion by means of a marriage", and, therefore, the resolution of the 5-judge panel was not only not solve the threat of violation of the constitution, but also to weaken the progressive decisions of the Supreme Court, as described above. In addition, it is an interfaith couple, in a recent case before the High Court in Allahabad, who sought the dismissal of a lawsuit filed against them under section 366 of the Indian Penal Code of 1860. the kidnapping of a woman against her will, with the desire to be with her, to marry her. The district court, in this case, was a step-change in the defence of the infringement of the right to privacy, the right to freedom and the right to choose a life partner, while the removal of the decisions that were being overlooked.