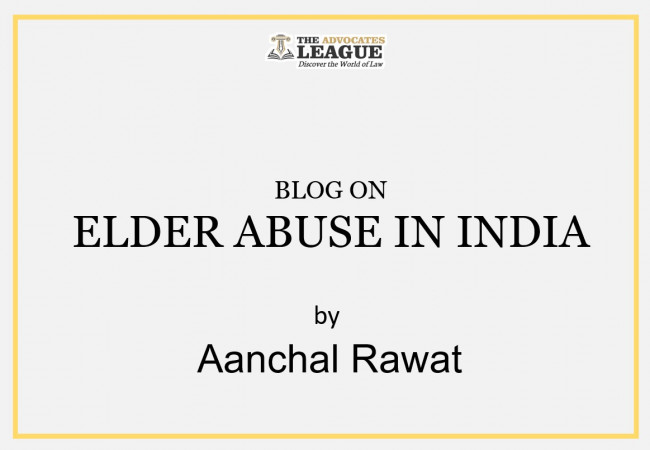 Elder Abuse is a single or repeated act or lack of appropriate action, occurring with a relationship where there is an exception of trust which causes harm or distress to an older person.[1]

The National Center on Elder Abuse recognizes seven types of elder abuse.[2] They are:

Physical force used against an elderly person can result in bodily injury, impairment, or pain.

Through verbal or non-verbal acts, pain, distress, and anguish are inflicted upon elderly people.

Use of elder's funds illegally or by using improper means.

Failure in fulfilment of obligations or duties towards the elderly person.

Such behaviour of the elderly person threatens the elder's health and safety.

Some of the signs which show that an elderly is being abused are:

● Signs of injury seems many times

● Not speaking as usual

● A decrease in functional abilities

The risk of death of elder abuse victims is three times higher than that of non-victims.[3]

An Abuser can be anyone. It can be a spouse, family member, friend, neighbour, volunteer worker, paid worker, practitioner, solicitor, or any other individual who has the intent of depriving a vulnerable person of their resources.

The elderly people who come under the following points have a higher risk of elder abuse than others.

● An elderly person suffering from Dementia,

● An elderly person having physical disabilities,

● An elderly person who is depressed, are lonely or they have lack of social support,

● An elderly person who is verbally or physically combative with the caregiver.

For the following reasons a caregiver can become an abuser:

● He is feeling resentful,

● He is an abuser or has a history of being an abuser,

● He is dependent on an elderly person for his living, finances, and other needs.

● He had a criminal history

● He has a mental illness.

In “A HelpAge India Research Report – 2015” which was conducted by (MaRS) Monitoring and Research Systems Private Limited, the following findings were obtained.

● ‘Property and inheritance disputes’ were the main reason for abuse at 53.2%.