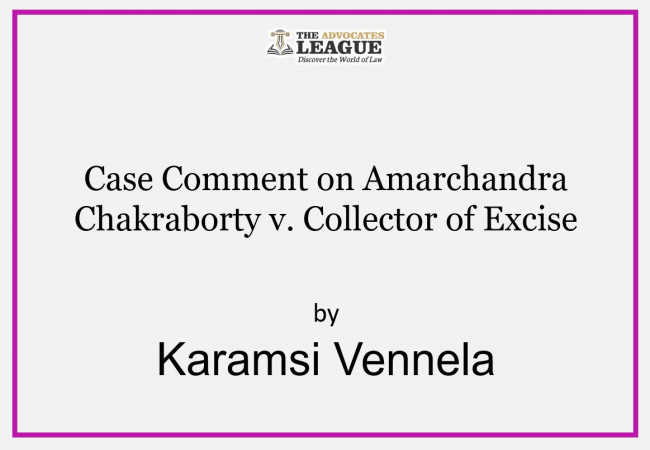 This is considered to be one of the landmark judgements with respect to the subject matter of interpretation of statutes. It is one of the important cases that have based their judgement on lines of ‘The principle of ejusdem generis’. The principle was defined and elaborated on this principle following the aspect of the applicability of this principle. The word ‘ejusdem generis’ means denoting a principle for interpreting legal texts which assume that when there is a general term accompanying the list of specific terms, such general term would be restricted to things of the same character as that of the specific terms.

The Latin expression “ejusdem generis” means “of the same kind or nature” and this is a principle of construction. With the help of this case court laid down some ground rules regarding the application of this rule. The case also discusses violation of various sections under the Bengal Excise Act, 1909, the applicability of violation of Articles under the Constitution of India and also discuss the powers of bureaucrats.

FACTS OF THE CASE:

1. The appellant was granted a licence by the Excise Collector to establish a warehouse for storage in bond and wholesale vend of country spirit by import and for supply to the excise vendors in the territory of Tripura on March 13, 1968, for five years commencing April 1, 1968, and ending March 31, 1973.

2. The mode of granting the licence was criticised by the Committee of Estimates as a result of which, the Governor of Tripura on July 2, 1970, inserted rule. 164-A in the Tripura Excise Rules of 1962 according to which, fees for a licence for the wholesale vend of country spirit were required to be fixed by tender-cum-auction.

3. The Excise Collector On July 6, 1970, exercised his powers under s. 43 of the Bengal Excise Act, 1909 as extended to the Union Territory of Tripura and withdrew the appellant’s licence granted to the appellant after 15 days' notice and remission of 15 days fee.

4. The appellant challenged this under Excise Collector's order in a petition under Article 226 of the Constitution of India.

6. Inter alia the Judicial Commissioner held that the appellant’s licence was in itself invalid as it was granted without public notice as required by the provision to section 22(1) of the Act.

7. The appellant filed a special leave petition in the Supreme Court

2. Whether the words "any cause other than" in section 43 be read ejusdem generis with the clauses mentioned in section 42?

The Supreme Court after considering all the facts held that the Chief Commissioner undoubtedly has the power to grant the exclusive privilege of manufacturing and selling country liquor or "intoxicating drugs" as stated in clauses (a) to (e) under section. 22, but for the subsection. (2) of this section expressly states that no guarantee of any privilege under subs. (1) shall exercise it unless or until he has received a licence. The court stated that it is obvious that the Collector is the one who grants the licence. within the meaning of section. 43, and therefore it was this officer who correctly issued the appellant's licence and who has the authority to revoke the licence under section. 43.

contains an enumeration of specific words;

(2) Subjects of the enumeration constitute either a class or a category;

(3) Such class or category is not exhausted by an enumeration;

(5) Lack of indication of different

By stating the above conditions, the court held that in this case, it is not very clear that the different clauses of section 42 constituted a category or a class. It was stated that the expression in the issue raised by the appellant 'any cause other than in section. 43(1) cannot be considered ejusdem generis with the causes specified in clauses (a) to (g) of Section 42(1).

Pertaining to the issue of violation of Article 14 the Court held that liquor Trade and business in the country owing to its inherent nature has always been treated as a special category requiring legislative control as per the law which has been in force in the whole of India since decades. The court held that in view of its injurious effect on health due to its overconsumption this trade or business is treated as a class by itself and it does not come under the purview of article 14 ruling out the possibility of violation of Article 14.

With respect to section 22(1), the Court held that the public notice under section. 22(1) is a condition precedent to the grant of the exclusive privilege of selling

liquor. The court added that the underlying policy of the section does not seem to allow such an important matter to be decided in the secrecy of office without giving it publicity. Failure to give such public notice was therefore rightly considered by the Judicial Commissioner to be fatal to the grant of the exclusive privilege to the appellant.

The appeal was dismissed.

The most significant aspect of this case is the clarity it has provided with regard to the principle of ejusdem generis. It’s clear interpretation marks its significance. The appellant’s contention in the case was that the interpretation of “any cause other than” in Sec 43 had an arbitrariness attached to it which challenged the expression.

In the case of Jagdish Chandra Gupta v. Kajaria Traders Ltd[1], interpretation of the words “or other proceedings” in the phrase 'a claim of set-off or other proceedings to enforce a right arising from contract' mentioned in Section 69 of the Partnership Act, 1932 was discussed. Supreme Court in this case did not apply the principle of Ejusdem Generis because the preceding words a claim of set-off did not constitute a genus.

Section 42 empowers the authority granting a licence, permit or pass under the Act to cancel or suspend it subject to such restrictions as may be imposed by the Chief Commissioner. Hence the Collector very well had the power and authority to withdraw the licence.

The court stated that Liquor business cannot be considered under Art.14 as it may be pointed out and this forbids class legislation but reasonable classification does not come within the prohibition. It was thus stated that the Excise authority had reasonable power to make a decision regarding this subject matter.

In a similar case of Krishna Kumar Narula Etc vs The State Of Jammu And Kashmir & Ors[2], the Supreme Court held that liquor dealing is definitely recognised as a business and a citizen has the fundamental right to engage in such business if he/she wishes so under Article 19(1) (g) of the Constitution of India. However, the court added that the State has the power to introduce a law under Article 19(6) of the Constitution to protect the public interest.

The instant case cannot be covered under the purview of being against natural justice. As the court stated, rules of natural justice on lines of which the appellant argued vary with varying constitutions of statutory bodies and the rules prescribed by the legislature as per which they are supposed to act and the question if in particular case rules of natural justice are contravened should be judged not by preconceived opinions/ notions of what they could be but in the light of the relevant statutory provisions.

Ambiguity is inevitable in court cases. Given the complexity of facts and overlapping of principles and provisions, cases often get caught in uncertainty thereby making delivery of justice either delayed or flawed. The appellants or the defendants may have to go to the upper courts again in view of dissatisfaction with the judgement. To save this time, Interpretation of Statutes helps in removing the ambiguity in construing the true meaning which confers the object of acts passed by the government. It is the responsibility of the judiciary to interpret the purpose of provisions and use them to impart justice and fairness. This case is a classic example of the judiciary giving a vivid understanding of the applicability of important principles, sections and articles.