ENCOUNTER: A BLATANT DISREGARD OF RULE OF LAW 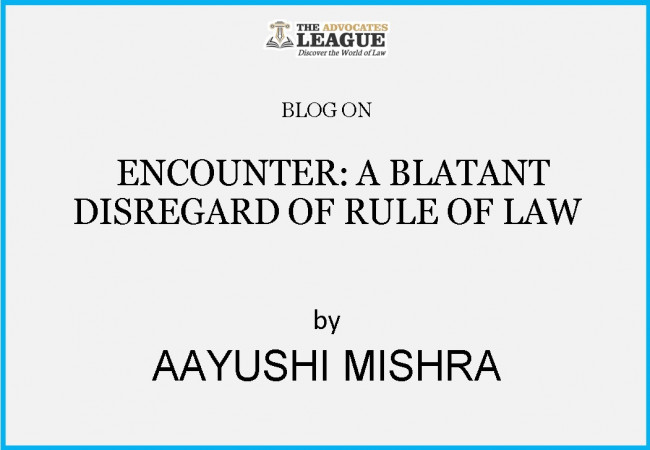 We are in Holy Orders and recognize only one law, the law of Dharma, the law of life-embracing, sustaining and unifying all activities of life”.

Rule of law or dharma is the supreme principle for the governance of the state. It paves the way not only in the direction of better functioning of any government but also in restoring faith and balance in the supremacy of law. Rule of law is the key to all the legal and ethical regulations for any enlightened civilized society. It lays the very basic foundation of the legal system by describing it as legal rules as legally regulated. The essence of this principle is that no one, not even the king is above the law.  India, the oldest civilization, largest democracy, and a staunch believer of equality, with morally upright people sometimes fails to restore its loyalty to basic principles of law and humanity. The recent surge in the number of encounter cases shows the failure of faith in the constitution and legal system of our country. Encounter is a shield provided to officers for rarest situations that are often misapplied. This apparently reflects the actions of those in authority creating a mockery of democracy and the judicial system of India.

Indian after gaining independence was constituted on the very idea of equality and democracy. Different articles of the constitution provide such rights; Article 14 guarantees the right to equality before the law and equal protection of the law. Article 21 guarantees the right to be heard. Also, Art 15, 16, 23 further strengthened the idea of equality by the incorporation of protective discrimination as a means of ensuring equality amongst equals. Nevertheless, no country can function without state machinery and it is of absolute significance to provide some privilege to this machinery for safeguarding the very concept of nation. Encounter is one such exemption given to machinery against criminals. However, this blanket of encounters with these machines is often used by them arbitrarily. Any act arbitrary and such heinous is a blatant disregard of the overall concept of rule of law and the idea of Independence. In other words, it can be said that there lies no difference between a colonial state and an independent state. At a place, we as a country act on principles of  “ presumption of innocence until proven guilty” and provide legal assistance to terrorists, to preserve their right to be heard. Pathetically another side of the coin uncovers an entirely bizarre image. Not only encounters are a serious threat but also fake encounters. Fake encounters are extrajudicial killing or it can be completely regarded as murder, is a purely malicious act by the state machinery. Some of the laws protecting such machinery are: The law relating to the right of private defense is contained in Section 96 to 106 of the Indian Penal Code (IPC), 1860.

Clause 3 of Section 300 of IPC, comes into light which provides that if any public servant/ any person authorized by a public servant exceeds their power to causing death while acting for the advancement of justice and which they believe as lawful and mandatory for discharging his duty without any ill intention, then they will not be liable for murder.

Encounter history is untraceable, its presence can be found in all the periods with different locations. However, prominent ones are the 1970’s Naxalites encounters, the 1980’s Punjab, and the Assam insurgency. When bullet for bullet policy prevailed. Operations blue star, operation black thunder, etc were carried out. As a country, we have questionable cases of encounter killing, from Pilibhit encounter case to Veerappan case of Tamil Nadu to Bhagalpur blinding case, to Ishrat Jahan case. However, presently there has been a surge in encounter cases in the country. Data presented by NHRC shows around 1000 cases of fake encounters during 2000-2017.

Analysis of the reports and news imposes concern and threat equally to this progressive society.  Also, the suspicion arises that are we even a country with the ideals and principles its foundations were laid and cemented?

The encounter can be regarded as cold-blooded murder which should neither be praised nor encouraged. Enriching cultural civilization and education do not favor eye for an eye. We as a society of the 21st century and advancing ideas cannot rely on the barbaric traditions of humans. Moreover, we cannot afford to set a new low in disdain for constitutional values.  India as a developing nation cannot let its law and order fall miserably. Therefore, there should be the inculcation of the ethical and legal standards among the people of this country.