MEDIA TRIAL – IS IT A THREAT TO THE JUDICIARY? 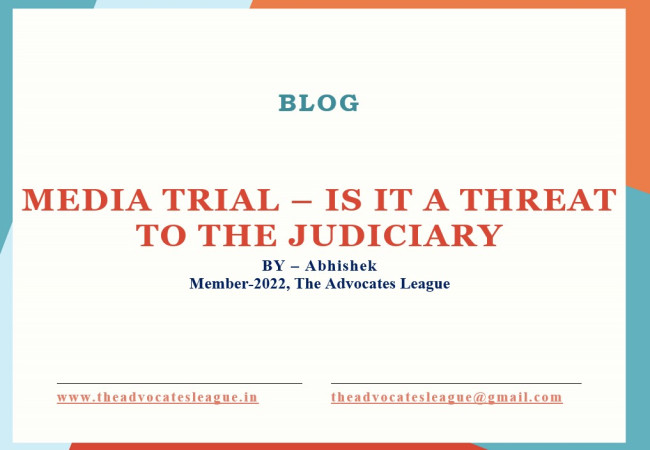 Media trials have long been a feature of the legal landscape. But media trials are increasingly common, and a number of factors are driving this trend. Media trials have been around for a long time. Some of the most famous trials in history were OJ Simpson, Casey Anthony and even William Murder Linde all had high-profile media trails that captivated audiences across the world. However, it wasn’t until recently that these types of trials have been making headlines once again. There are several high-profile cases that were broadcasted over the Internet, allowing anyone with an internet connection to tune in and watch the trial happen in real time. And while some people may think this is a bad thing, researchers remain divided about whether or not broadcasting court proceedings poses a threat to the judicial system and if it does, whether it is an inevitable one or something we can avoid.

The rise of social media means that information can quickly go viral and be shared worldwide in just a few clicks. There has also been an explosion of new digital channels on cable and streaming services devoted to true crime, lifestyle and other niche programming. When the story broke that social media was fast becoming the court of public opinion rather than just a platform for people to air their views, little did we know it would soon become a threat to the judiciary itself. What started as a small-scale sting operation by some news channels against several lawyers and judges has now blown up into an all-out war with videos from these ‘stings’ being released almost every day. The only silver lining in this whole debacle has been that it has led to many introspective debates on how we can protect our judicial system from such attacks in future. But is it really just about safeguarding the judiciary? Or does this also point towards some deeper malaise? While most of us are preoccupied with trying to answer those questions, here are some important takeaways after three weeks of non-stop discussions on media trials and their implications.

This has created greater demand for lawyers who specialize in high-profile criminal defence cases and public relations firms that offer advice on how to handle the media. Furthermore, with so many news outlets competing for viewers and readers, scandals have become newsworthy opportunities rather than simply something to avoid. These factors have resulted in a dramatic shift in how lawyers view media trials with more defendants than ever willing to waive their right to privacy in return for greater exposure and larger paydays by selling their story rights directly or through intermediaries such as Hollywood agents or book publishers.

Hope for the Future: Awareness Is Key

As with all things, awareness is the best antidote to the ills afflicting us. Unfortunately, in the mad rush to shout down the other side, we seem to have completely forgotten that basic tenet of rational thought. Nothing exemplifies this better than the way in which the word ‘credibility’ has been bandied about by both sides. For the pro-media defendants, the word ‘credibility’ is used to justify their attack on the judiciary. For the anti-media defendants, it is used to justify why their targets are fair game. The irony is that in this entire debate, there is almost no discussion about what ‘credibility’ actually means.

We need to stop using words like “media trial” and “ruining the judiciary” so casually.

We need to stop using words like “media trial” and “ruining the judiciary” so casually. One of the most common arguments being made currently is that the media has accused sitting judges of corruption without conducting an investigation or giving them a chance to defend themselves. But calling it a media trial is incorrect. A media trial is when a person is tried in the media, which is extremely rare. What the media is doing is reporting the allegations against the judges. Similarly, people have also been accusing the media of “ruining the judiciary” with its sting operations. But actually, this is not true. The judiciary has its own structure, hierarchy and functioning. A media sting cannot undermine the judiciary. What’s more, the judiciary is not one single unit; it’s made up of many different sections and departments. So even if the sting reveals some wrongdoing in one department, it won’t automatically reflect on other parts of judiciary.

The general public has limited access to judicial data and therefore still relies on mainstream media for information.

One of the arguments being made against sting operation by the media is that it is premature. If a judge is corrupt, why can’t the Bar Council take action against him/her? Why does it have to wait for the media to investigate and make a video about it? But this argument is not valid because the Bar Council does not have its own investigative wing. It’s not equipped to do sting operations and collect evidence. So the only option available to the Bar Council is to take complaints from aggrieved parties. And given the pressure that the judges are currently under, the number of complaints against them is only expected to increase.

To build a case against a judge or lawyer, it would take more than just a video recording of hearsay conversations.

The media is getting a lot of flak for not recording the sting operation and not being able to provide any evidence. But this is not how sting operations are conducted in the real world. Stings are pre-planned operations to get some concrete evidence. Imagine the situation. You go to a judge with a hidden camera and start accusing him of corruption. He will obviously deny everything and there will be no evidence in support of your claim. So, to build evidence, a sting operation will follow a certain protocol. The journalist first makes the contact. He then begins building a rapport with the other person. Finally, he tries to get some concrete evidence against the judge.

We Need to Stop Celebrating Virtue by Shaming Vice

One of the most disturbing features of the ongoing media trial is the way in which it has become a source of celebration for those who have been clamouring for ‘transparency’ in the judiciary. This is particularly true of the ‘sting’ operation against a few judges and lawyers who are accused of taking bribes for providing favourable judgments. There has been a propensity to ignore the possibility that the media bribed these judges in violation of the law. There has also been a tendency to overlook the fact that accepting a bribe is a crime and that the victims are not just the judiciary, but also the general public.

While the judiciary might need to revise its own codes of conduct, we also need to address the root cause of why people are violating those norms in the first place.

For instance, many people have pointed out that the Calcutta High Court judge should not have been seen riding pillion with a lawyer on a two-wheeler. On the other hand, we must consider the problem as a whole. The lawyer who was accompanying the judge was likely to be his close friend and the judge was probably unaware of the code of conduct that he was expected to follow. Similarly, we have seen many other lawyers violate the code of conduct in the videos that have been released. So, while we need to take corrective action against those erring lawyers, we also need to educate the lawyers and judges about the code of conduct.

Finally, what is most disturbing is that regardless of which side you are on, it seems trial by media is here to stay.

No matter how many debates and discussions we have, we have to accept that trial by media is here to stay. So, we need to work towards building awareness about how to conduct yourself during a media sting operation. The judiciary must also take some proactive measures to protect itself from this onslaught. The Calcutta High Court has already formed a committee to look into the sting operation. And it would be interesting to see how it addresses the findings of that committee.